To the central content area
:::
Home Articles From New York to the South, from the South to Japan, and back to New York 10 years after.
＃Column

From New York to the South, from the South to Japan, and back to New York 10 years after.

Under the structure of the globalization process, art residency became the first phase of a testament to young Taiwanese artists in recent years. By resident exchange in various places, the artists grasp chances to cultivate a new dimension of imagination and expand their life experience and creativity. I recall my career as an artist under different art residency projects, from graduate student to the first five years of work. In this article, I would like to share my own experience in art creation during each phase of art residency.

The artists during their residency in New York would usually get together. The photo was taken in Su Hui-Yui‘s studio at Plan B, New York in Aug 2009, with Chou Shu-Yi, Chen Yung Hsien, Chang En-Tzu, Robbie Huang (from right to left).


Selected by the Ministry of Culture, I visited ISCP (International Studio & Curatorial Program) in New York. I started my first artist residency in 2009. In New York, as a hub of contemporary art, I projected myself in the big city without hesitation. ISCP is a professional art residency institute located in Brooklyn. You could easily get to Manhattan by taking the L Train. The institute would arrange regular meetings with curators, and art institution tours for the residency artists. The open studio gave comprehensive planning and promotion and with the capacity to allow more than thirty international artists to stay, fulfilling the idea to create a network between artists from different backgrounds.

As a young artist, during the four months of residency, not just immersing in local culture, I was also aware that there is still a gap between the city and my art creation. After the financial turmoil caused by the Lehman Brothers in New York in 2009, galleries and museums became conservative and cautious. Therefore, those might be why I was not self-gratified by the art residency project in many perspectives as I expected. 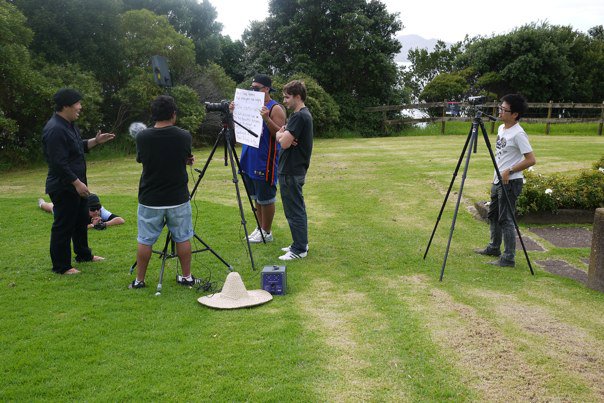 Art residency project “A Practice of City Guide: Auckland” with assistance provided by the students from Unitec in Apr 2011.

Selected by Taipei Artist Village, I started my three-month art residency project at the Unitec Institute of Technology, New Zealand. The institute arranged for two artists to stay in single-family homes during the same time. By having tutorial sessions, the project created a high interactive format between artists and students. In addition to sharing the artwork during classes, Professor Marcus Williams, who was in charge of the art residency project, also arranged students touring the artist through the space and history of the city to discover various conversation angles with locals. During production making, the artist could also ask for the assistance of students. The outcomes showcase in the gallery space of the art school as a public exhibition.

I got genuinely excited to step on the land of the South for the first time. As a pretended student, I also joined school activities, such as boating and wine tasting. During residency, walking through school and outside the wall, I got the chance to immerse myself as a local and strike a balance between work and living.

The artwork during Unitec residency also reflected my status that I filmed myself as a host of tourist programmes in Auckland. Using video performance, I repeat the cue cards written by students as an amateur to present the isolation of space, language, and identity. This was the first time I performed in my video work. Rewriting the city landscape and cultural diversity by transforming the performing subject also became my creation model in the following residency projects.

My video performance filmed in a rebuilt Japanese style living room during the art residency in Koganecho in Feb 2012.

In 2012, I was invited to join two art residency projects in Japan, a month and a half in Koganecho, Yokohama, in the spring, and two months in Aomori Contemporary Art Centre, the homeland of Yoshitomo Nara. Both of the residencies aimed to open as a public exhibition with a specific topic.

The early stage of Koganecho area served as a red-light district built up along the river with over 105 one-room brothels. In 2005 Bye-Bye Operations organized by local police and government cleaned up the prostitution problem in Koganecho. Running Koganecho Art Management as NPO in art revitalized the area and offering local designers or artists to rent a studio at a fair price. Through arranging different art activities, NPO tried to transform Koganecho into a new image.

In 2012, Koganecho Art Management operated the international art residency for the first time by inviting four artists from different Asian countries to create the topic-living room in performance, video recording, or painting. The artists stayed and worked in the space that used to be brothels. The studio was not spacious with simple decoration. The artists could easily imagine how the space was used for. Operators also led us to visit a few brothels that remain before the clean up to sense the sudden haste of the moment.

My work was based on the idea of "living room". I interviewed and photographed the surrounding residents as the materials to build up the Japanese living room (the stereotype that I learnt from the animation Chibimaruko Chan). When decoding the space, I also recited the Japanese keywords provided by locals and had a short performance to make a video. I tried to present a living room scene that visualized my imagination of foreign viewpoints and local expectations. At that time, Japan still suffered from the trauma of the 311 earthquakes. The artwork aimed to raise the warmth of family gatherings.

I stayed in Aomori in Autumn. During residency, I sang some of the Japanese popular songs from the 80s to 90s with the assistance of the organization's internship. All the songs were versions of Taiwanese covers, such as "The Flowery heart", "Red Dragonfly", "Goodbye My Love". In my video recordings, singing with a familiar rhythm, I noted the Japanese lyrics in Mandarin pronunciation to help me perform the songs perfectly in each popular spot in Aomori. 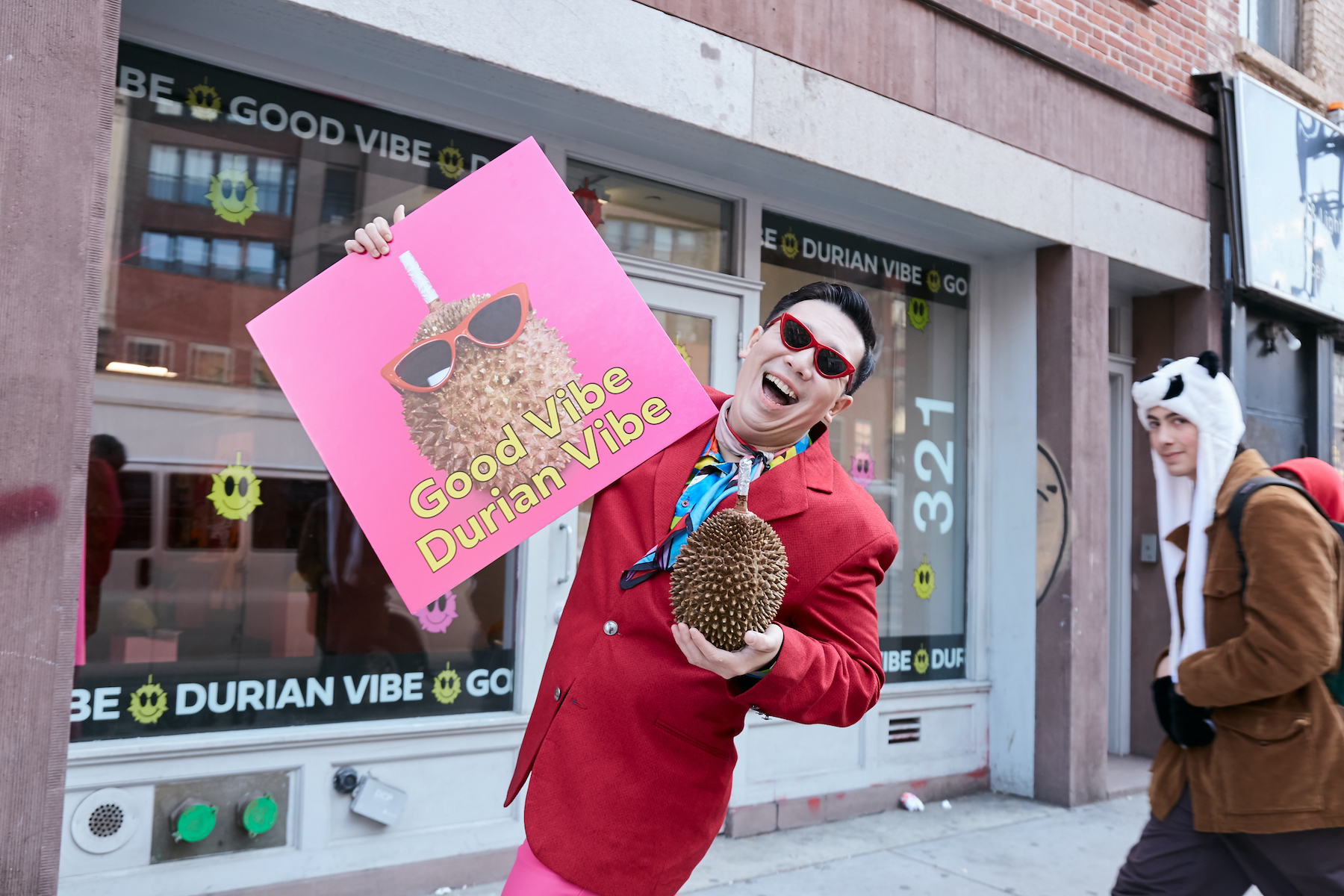 The Site-Specific showcase in Performa Biennial. The “Museum of Durian” opened in SOHO by the virtual KOL FAMEME in Nov 2019.

With previous residency experiences, I started to realize the importance of the startup phrase for an artist. I also found the balance between living abroad and creating art to cultivate a nomadic artist's art. From my early video work of language translation to highlight the political meaning of playing the local language by myself to speak the local language after understanding the culture, I tried to voice and reformulate the idea of foreigners and identity. However, after fitting in my residency mode, I started to stop doing art residency projects in two to four months duration.

In 2015, I joined the international exchange plan run by the Kuandu Museum of Fine Arts to do an art residency at the Royal Melbourne Institute of Technology in Melbourne, Australia. Within one month of residency, I communicated with local art institutions and students to develop networking for locals. Somehow, when I recalled the memory during that time, I wondered why I did not get inspired in my first time in New York. I even felt deep frustration. Maybe I was too young or had unrealistic expectations of that city.

In 2019, invited by the Performa Biennial, I visited New York three times in two and half months to start the commissioning production. I found that my body memory got refreshed right in a minute. I even could think of others' viewpoints to start a conversation with the city. I developed a live performing plan efficiently to create the character FAMEME to walk in Times Square to review influencer’s culture and entertainment business. This project might be the continuity of the experience in 2009. After ten years, the art residency project in the past did bring up its value. Through the years, I also enhanced my art philosophy to pump in better timing to deliver a solid idea.

Once doing art residency, you will need to face the differential space, culture texture, residency duration, various tasks in different city context. And the character and resources of the institutions in each project might be also very different. All these experiences will be your lesson when being an artist.

Art residency could be considered a long journey to escape from daily reality in Taiwan and enjoy being a foreign artist. Also, art residency gives you a chance to look back at your inner self. If you just start doing art residency, maybe you should not have too many expectations and pressure like I used to. Just open your mind and let the city lead you. During the residency, you will see a different lifestyle, experience a different environment, and get to link people worldwide. Each place you stay will be your force of connection and resource when you come back. If you are already used to living a nomadic residency, you find the balance in different frames. From my own experience, when I look back to myself, I know that every creation also represents a different stage of life, meaning, and memory.


More Articles
Back to top