New York perhaps to be the temple of contemporary art. However, if you would like to learn the true face of American, the legacy left by the 20th century and the merciless consumerism community, or if you would want to shower your immerse your mind by the sunshine and pearly spray painted by David Hockney in 1960, Los Angeles and California will be your best choice.

The cities did not shape with intolerable vulgarity or ambiance as Europe or the east coast in America. If you happen to be the Red Hot Chili fans, you should not miss the bridge located in East Los Angeles. 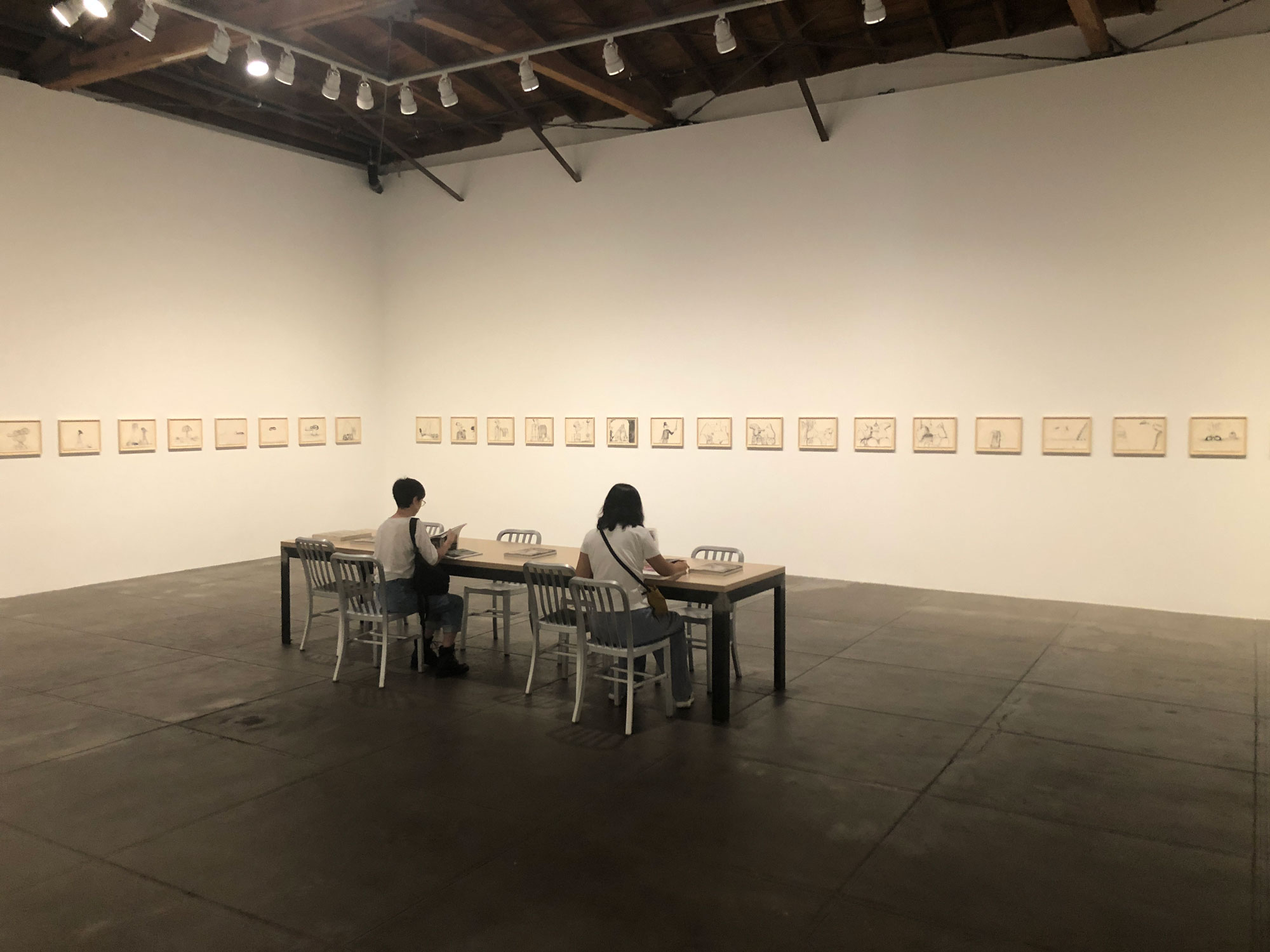 In Sep 2019, Hauser & Wirth, a modern art gallery located in East Los Angeles, held an exhibition:" Resilience - Philip Guston in 1971". The project reviewed the works aged in 1971 by Philip Guston, the American Neo-expressionist, with artworks included a series of comic manuscripts satirized with opposites of anti-war and anti-Nickson.

As the old town sat in the Los Angeles metro area, the Spanish colonial-style architectures in Santa Monica were still well-preserved. Although the houses along the coastline near the city were already replaced by modern and functional buildings (neighboring Santa Monica, we could find Santa Barbara as another Spanish colonial-style town.) Moving a few blocks parallelly toward the east land and leaving the beach behind, you would find the 18th Street Arts Center(the "18th Street").

You also can find the old shopping street, warehouse, airport, and light industry machinery, even a quarry that was still running, all scattered around the area. The UCLA Affiliated Hospital was also located here. Obviously, in Santa Monica, the high-end zone housed on the coastline, the north, and Venice Beach in the south. The sense of richness decreased gradually toward the landward side. If walking along the metro line to downtown, you could tell the unbreakable class defined by consumerism by observing the yard's decoration in each house.

Outside, the studio's window laid the newly completed metro line from LA Downtown to the beach of Santa Monica at very high usage. With bicycles and pharmacies opened almost in every corner brought a sense of literacy. Be that as it may, at Santa Monica downtown (not LA downtown), which only 10 minutes walk from 18th Street, you could still acquire international luxury services under consumerism. Santa Monica downtown was one of the most expensive tourist spots that you could get everything you want.

I was staying in Los Angeles in 2008, the year that Obama first ran for the presidential election. Although there were still three more weeks before the election, I could always sniff the excitement and hope for change in the air within the art community. I revisited California 10 years after, and many things had changed. Liberals were frustrated by the Trump administration. However, according to my surveys with Uber drivers in private, the young generation showed their surprising satisfaction with California and the State's economic trends with the summer of 2019. I even met two German drivers describing themselves as students schooling for academic studying and earned some quick money in passing. When I looked back to California's days in 2008, many areas of the cities were often marked as unsafe. While in 2019, if you asked the same question again, the people from California usually would reply that only some areas in the south were the places that "not suggest visiting unless it's necessary."

In 2019 Los Angeles was a witness to the growth of the art industry from the west coast. The proliferated galleries built on the east side of the city were hard evidence of the trend. This trend was a relative result of the comparison with another city New York. In the past few years, New York started to lose its influential power on global reach, not even mention the hardship in maintaining necessary living conditions.

As a counterpart, Los Angeles showed her distinct advantages by housing and space capacity in the city and attracted many young artists to stay for residency in the past ten years. Established as a Satellite city, Los Angeles also had cushioned the gentrification impact. Compared with New York and San Francisco, Los Angeles provided more friendly consumer prices. (The advantage did not cause by the culture or social welfare policies but the justifiable spatial conditions.) The friendly living environment allowed the artists to have more flexible options, at least superficially,

Nevertheless, except for a few districts that the cost of living was relatively lower, most of the area surrounded by Los Angeles, such as the coastline, Orange County, Irvine, Silicon Valley, and San Francisco Bay Area, were identified as luxury zones with an unjustified high level of property prices ruling by the M-shaped society. Rumor has it that some Uber drivers who worked around Silicon Valley chose to stay in their car every night to avoid traffic and housing expenses. Ironically, White-collars' lavish lifestyles still couldn't cover the fact that the State government, which was on the verge of bankruptcy, didn't have sufficient resources in conducting public facilities. The shortage showed the effect of maintenance problems on road construction and sanitary conditions. Take Santa Monica as an example. Compared with my personal experience in 2008, in 2019, even though the economy upturns in the States due to the trade war, the number of homeless people increased. the social tension also became more visible. (You could find more and more people shouting to the sky without any reason, including me.) For the artist in residence, issues of urban governance, social welfare, and social structure were inspiring materials for creation. For example, The Winter Office from Sweden, who also had their art residency in 18th Street at the same time as me. The Winter Office Website.


Who should visit on 18th Street, and what should we do in the art center? 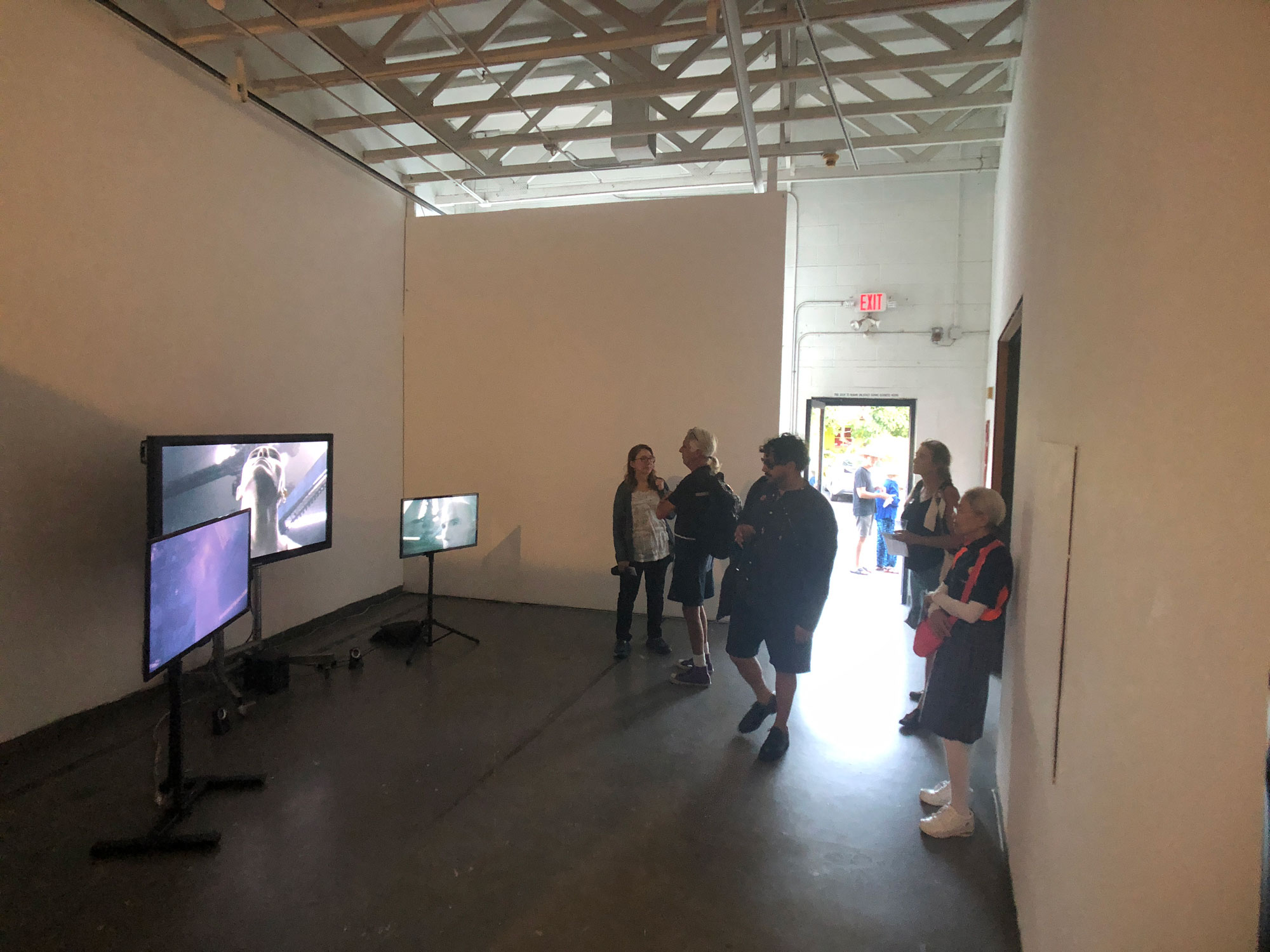 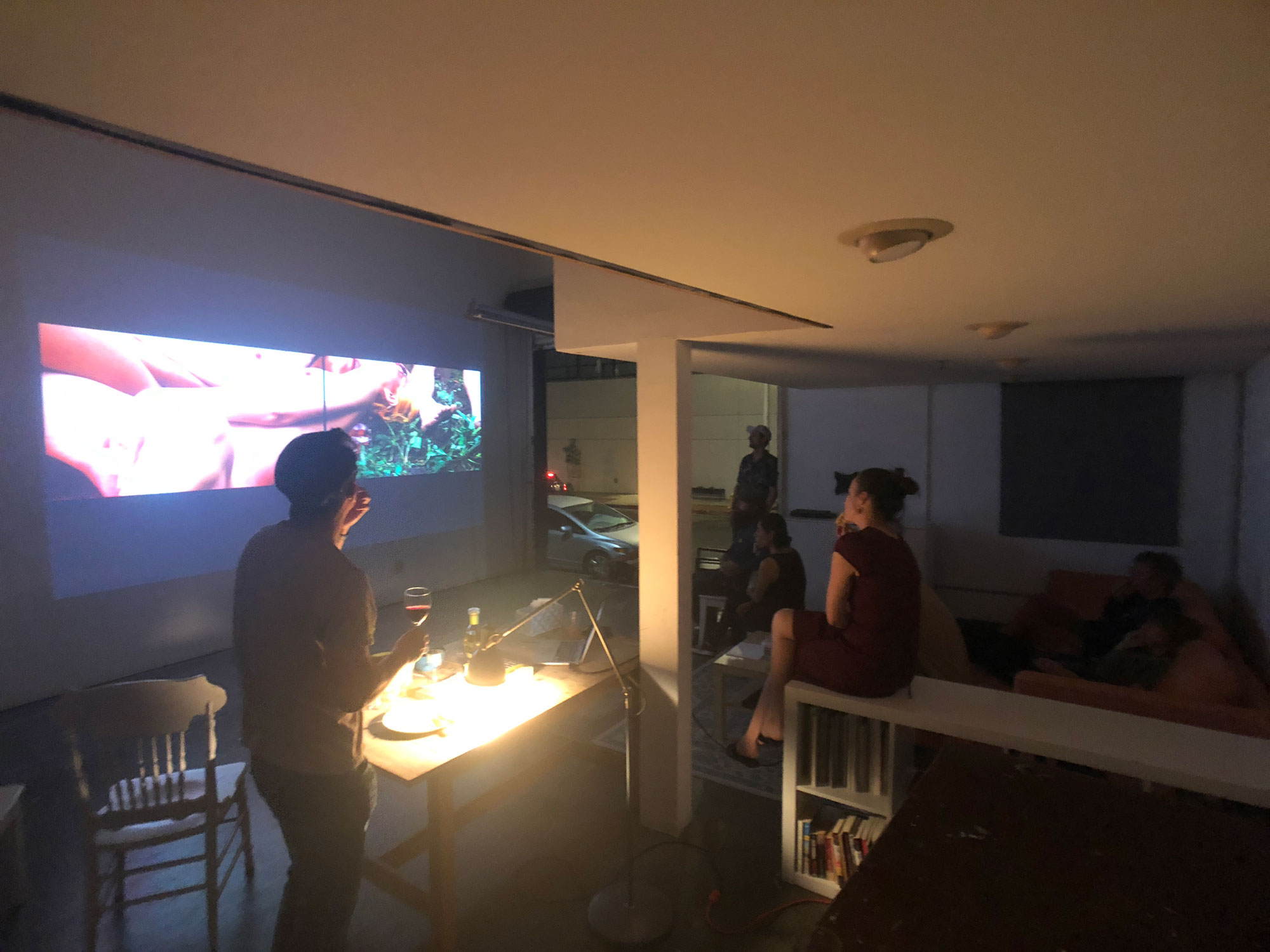 The guests visited the open studio by Su Hui-Yu in 18th Street, Santa Monica, in Sep 2019.


There's no real possibility of an art institution that could stay constant of its asset and mission over generations, especially to medium-sized institutions like 18th Street. The assignment of chairman and the composition of board members also affected the conditions of operation. As far as I was concerned, 18th Street was more suitable for new media and digital artists to stay for residency at this point. The reason was simple, 18th Street cooperated directly with Joel Ferree, the curator from the digital Assets department of Los Angeles County Museum of Art(LACMA). Moreover, the department would arrange regular visits to the artists' studios and keep the connection in detail. (Instead of being a mere formality.) Meanwhile, After a detailed study of the latest residential artists' list, you would notice that most of the artworks focused on a digital project and gained high interest from the public. Hence we could see that 18th Street attempted to dedicate themselves to the digital and new media field. Lastly, after merging with Airport Campus, a new airport nearby, 18th Street, obtained more functional space. Assisted by adequate audio and visual equipment and the broadcast from EZTV Media & Archives, an independent TV platform run by local visual artists, all the technical supports were beneficial to art creation.

Compared to other art residency institutions, the studio in 18th Street showed its spatial and convenience strength. Besides networking, 18th Street was also suited to the artist who focuses on painting or any format. But the open space also had its cost that you might need a car to travel between museums and galleries. Unfortunately, even equipped with light rail or a mobile intellectual system, Los Angeles was still a motor city. 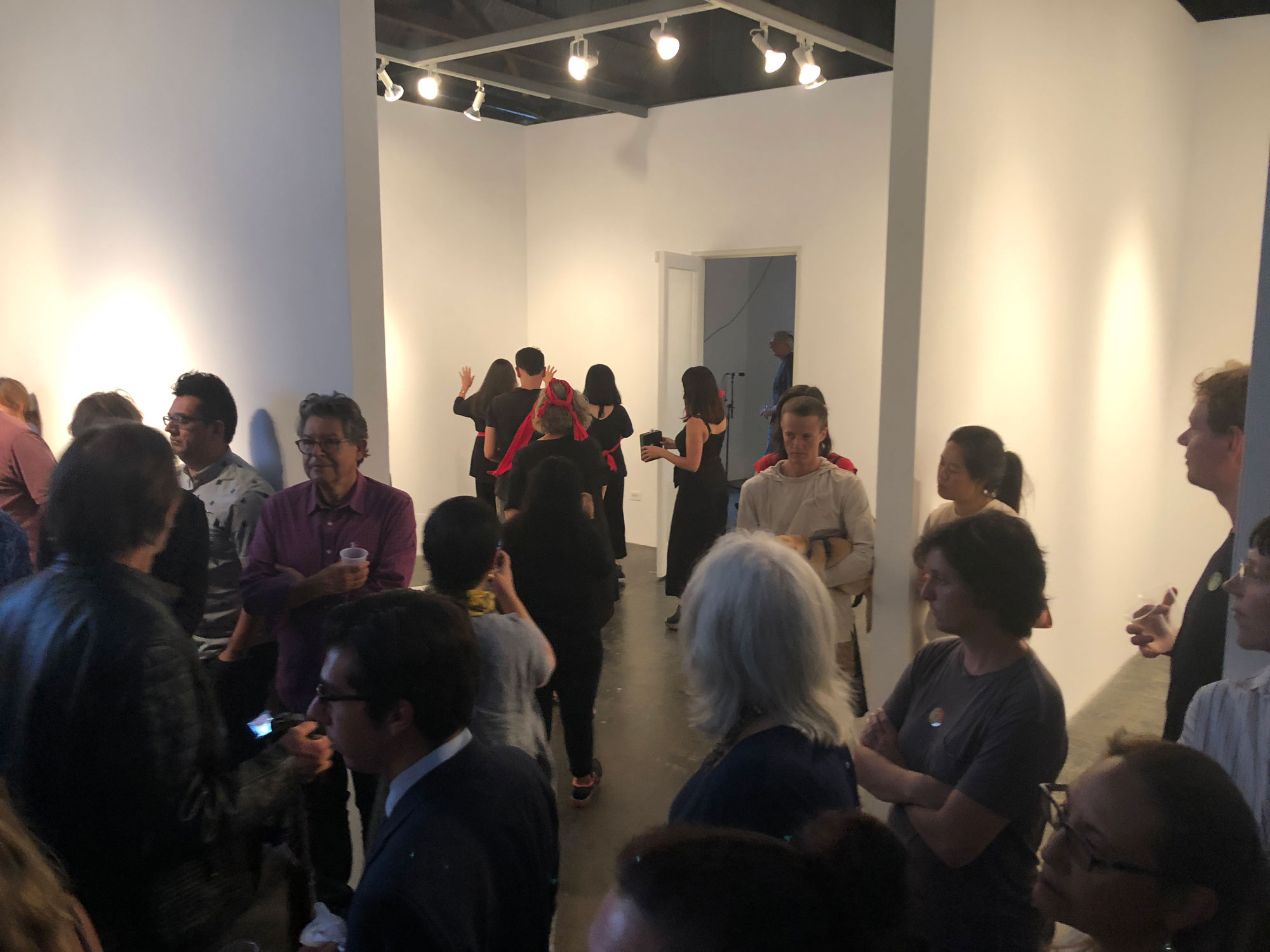 Airport Campus had been combined with the 18th Street operating system. The joint created a closer connection with the local art community and had resources been utilized effectively. The picture showed the performing artwork in Airport Campus by notable duat art group Postcommodity and Guillermo Galindo.

During art residency, the external partners would come from the visit of LACMA, invited by 18th Street, and LA Taiwan Academy (Ministry of Culture). Through a recommendation by LA Taiwan Academy, I visited the famous UCLA Film & Television Archive. Browsing through the Archive, I had a study in Science fiction films, documentaries, and TV episodes from 1960 to 1970. The research was instrumental in my next art project. With the help of LA Taiwan Academy, I had the chance to reach Paul Malcolm, the curator of the Archive, and create the opportunity for me to present my work at the 2nd Taiwan Biennale Film Festival. The organizing of the Taiwan Biennale Film Festival had several purposes. One of the objectives was to build up a constant academic connection for Taiwanese film and research with UCLA. The other goal was the cross-cultural vision of the curator Paul Malcolm could help us to rethink the boundary of film and video art and keep abreast of the trend of western visual art studies. Last but not least, With his interdisciplinary thinking, the curator also connected the film festival with the prestigious contemporary art institutions, the Hammer Museum, and created a successful result in the cooperation of multi-institution and content by the Win-Win-Win situation based on video art, contemporary art, and Taiwanese film. If you also chose 18th Street for art residency, please make fair usage of the benefits from the three institutions.

If you admire European value, you may not find yourself comfortable here. If you only take the metro, you might miss lots of fun. Or let us forget about the assumption. 18th Street is designed for the artists who are preparing for a new project to precipitate themselves. The inspiration for creativity might spark from the sunshine and sea breeze by the west coast.